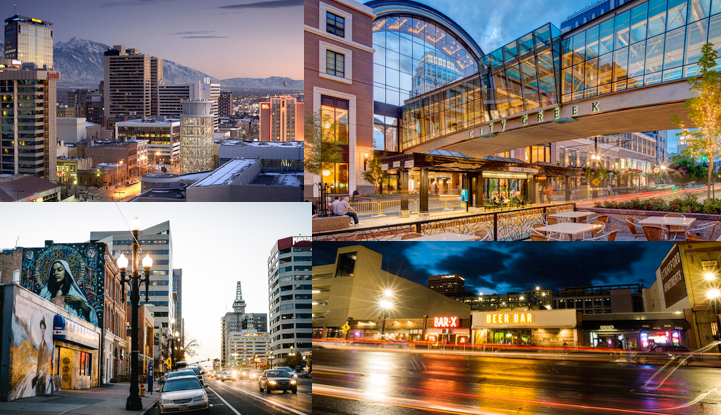 It’s a proven formula for real estate success: Combine a thriving tech scene and downtown development with enviable access to nature, and residential property will boom.

For those unfamiliar with Salt Lake City, Utah’s capital seems like an unlikely pick as an up-and-coming metro. Outside of assumptions about its conservatism, owing to its position as the seat of the Mormon church, Salt Lake City may offer only one frame of reference for those unfamiliar with Utah urbanism: a unique grid system, known as the Plat of Zion, that resulted in massive, oversized city blocks. There’s a longstanding conservative image here, that you can’t have fun in Utah outside of trips to Park City or national parks. That perception is finally getting recognized as being just not true.

Those seeing Salt Lake City for the first time today would find a city, and downtown, starting to hit its stride. By many measures, Salt Lake City isn’t merely catching up with its peers, it’s booming. The Urban Land Institute ranked it the nation’s third-best market for commercial development in its 2018 Emerging Trends report, fueled in part by the big names relocating here (Goldman Sachs’s second largest U.S. office is in town).

A booming regional tech economy, dubbed Silicon Slopes, includes homegrown firms valued at more than a billion dollars total, as well as offices for big names such as Adobe, Twitter, and Electronic Arts. Literally and figuratively adding runway to the region’s economic growth, a $3.6 billion airport renovation will open in 2020.

Despite Salt Lake City’s smaller size and slower post-Recession boom, it hasn’t been immune to the challenges faced by other U.S. metros. Rapid growth has exacerbated the affordable housing issue, the crisis led Mayor Jackie Biskupski to propose an extensive housing plan, “Growing Utah,” late last year (her predecessor Mayor Ralph Becker had also submitted a plan to attack the affordability challenge). While nearly every major city currently wrestles with these issues, Salt Lake City has actually begun discussing and debating solutions earlier in its boom than others.

Check in with us to find out more about living in the city.

← Why 2019 Promises to Be Better for Buyers
Want to know how much it will cost for that remodeling project? →